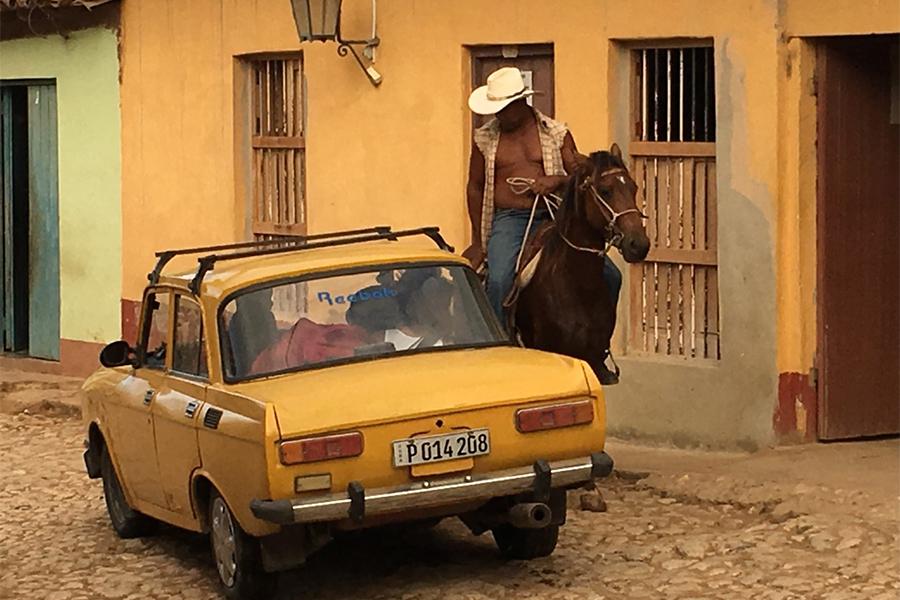 Our family recently spent ten days in Cuba. It was a very interesting holiday—time warps, the best and worst of socialism, initial days of entrepreneurship, corruption, racism and simplicity. We visited La Habana (Old Havana), Viñales (the scenic tobacco-growing area), Playa Larga (with lovely beaches and scuba diving) and Trinidad (a delightful town stuck in the 1850s).

These are some random thoughts from our trip. In a way, it reminded my wife and me of India in the 70s. Consumer choice was limited—governmemt stores had one brand of soap, one brand of beer, one brand of tea, one brand of bottled water, etc. Multiple brands are not necessary in a socialist world. The benefit of this was that there are no ugly billboards with advertisements to mar old buildings and the countryside. Most cars on the road are old—beautiful American cars from the 50s and the boxy Soviet-era Lada. There are ration shops where people line up in the morning for milk (strict quotas for each child). And of course the private stores where products stolen from government stores are sold at a premium.

Food is sometimes in short supply. At Playa Larga (where the Bay of Pigs fiasco took place) we did not have eggs for two days. At another place, there was no bread for sandwiches. Many dishes on restaurant menus were not available. We came across no junk food either. For ten days we did not see a packet of chips or chocolates (other than the Toblerone we had carried to hand out). As a result there is hardly any litter, because there are no packets to throw out.

We met lovely people. Among them, a black professor who lost his job after he wrote an op-ed in the New York Times a few years back on racism in Cuba; after all how can racism exist in socialism! But it does. Officially only 10 percent of Cuba is black, which is strange when about a century back there were probably more blacks than whites in Cuba (Cuba was one of the last countries to ban slavery). A delightful young lady explained how the census is carried out. She showed us her ID card which says she is ‘blanco’  (meaning white). She looks white, but her ancestors were Chinese and black also. The census collector decides on your race by looking at your skin colour, not based on your ancestry; a novel way for data collection.  Hence, 60 percent of Cuba is white. We spent New Year’s Eve in the run down part of Old Havana. We had met a Cuban earlier in the day, who invited us home. He said he is poor but we will have a good time. It sounded like an interesting adventure and I gave him some cash for dinner. He didn’t run away with it. At 9 pm he was ready for us with a lot of rum and some great food that he and a friend were cooking while we chatted away. He told us that his house was run down because he had been in jail for four years and had recently got out. His crime: Talking to a foreigner, without permission! What a lovely guy he was, with a big heart.

And we met so many lovely people like him in Cuba. At Playa Larga we tipped our scuba bus driver and dive leader well because they were helpful and pleasant. The next morning the driver and the diver brought bananas and sweet limes to thank us. We never felt unsafe in Cuba and we did not see cops all over the place.

We stayed away from the touristy regions and hotels. We stayed in homes of locals (thanks to Airbnb, which recently started in Cuba). We met people who revered Fidel Castro and for many of them, Fidel was the only leader they ever knew. Some said that Fidel only talked and did nothing; whereas his brother, Raul, doesn’t talk much, but is doing a lot more. Raul allowed entrepreneurship to kick off —there are now private restaurants, guest houses, taxis and shops—and Cubans can own property. We spent a fun evening with one of the first restaurant owners in Trinidad, a historical town caught in a time warp. Thanks to owning a restaurant, he could now afford to travel overseas.

Monthly salaries are around $20 per month. A meal at a simple private restaurant would cost the four of us $50. Hence, those who had initiative would start something on their own and make a lot more money. Renting a convertible car on New Year’s Eve for an hour cost us $60; it was possibly the worst time to rent a car in La Habana! We spent time with a political artist who must be reasonably wealthy; he has an assistant who handles his commercial negotiations. The government supports his work because they don’t fully realise that he criticises the governmemt through his art!

Yes, we enjoyed having currency notes of all denominations, after being starved of cash in India thanks to the demonetisation. But you had to get them from a state-owned money changer, where the lines were long and the wait could be over an hour. We finally discovered that the staff at fancier hotels would convert our euros to local currency for a very small fee; no waiting in lines… micro entrepreneurship is flourishing in Cuba! Credit cards are hardly used in Cuba. A digitised economy is many years away.

The countryside is beautiful, the scuba diving great (with an amazing wall drop just off the coast) and food wasn’t as bad as we had been told (thankfully). But vegetarian options are limited. The poverty in Cuba didn’t hit us hard, possibly because we were coming from India. And the music – fantastic. Only live salsa music; playing recorded music seems to be a sin in Cuba. There was music wherever we went and lots of dancing. Mojitos and Salsa make a deadly combination.

So has socialism and Fidel Castro been good for Cuba? One of our hosts gifted us a book about the way the mafia and the previous regime plundered the country. La Habana had become the sin capital of the Americas and the mafia ran riot in cahoots with Batista, the former president. The country was ripe for a revolution and Fidel was the saviour.

But he soon set up a system that reminded me of the book Animal Farm where all animals were equal, but gradually the pigs became ‘more equal’ than others. The talk on the street is that the military and Castro families control most economic activity in Cuba. We had lunch one day in a fancy restaurant allegedly owned by one of Fidel’s sons. Cubans have suffered for too long—first colonialisation, then crony capitalism and finally socialism. The lazy ones are happy making $20 per month and getting all their basic needs (food, medicines and education) for free or at highly subsidised rates. The more entrepreneurial ones deal in black markets or set up small businesses (mainly related to tourism). Education and health care are supposed to be the success stories of socialism in Cuba. But I soon realised that there are different qualities of health care in Cuba—those for foreigners, those for the rich Cubans and those for the rest of the people; Animal Farm all over.

And if engineers and professors have to drive taxis to pay their bills, one wonders about the benefits of universal education. One doesn’t hear of people trying to swim across the seas to get into Cuba; only of Cubans trying to swim out. But we also saw how the US policy on Cuba has failed. The anti-Cuba lobby in the US seems to be strong, backed by immigrant Cubans. But the economic blockade has hurt the poor the most and it has not toppled the Castro regime. It made me more convinced that economic blockades do not work. It will be interesting to see how Trump handles Cuba.

As we flew out of Havana, I was confused about how I felt about our ten days there. The four of us had a great family holiday. We had met some charming and friendly people. But it was sad to see how a beautiful and prosperous country had been bankrupted, first by Spanish and American colonialists, crony capitalism and then socialism. Despite all of this, the people are cheerful. Cuba has opened up under Raul; you no longer go to jail for talking to a foreigner and you can own your own small business. But Cubans need to take control of their own destiny instead of waiting for America to drop the blockade.

Socialism had killed a lot of the initiative of Cubans. At the same time, Cuba looks all set to grow as the shackles of socialism fall apart, entrepreneurs take charge of economic activity, competition is encouraged and incentives get aligned properly. The island could shine soon, like India after 1991.