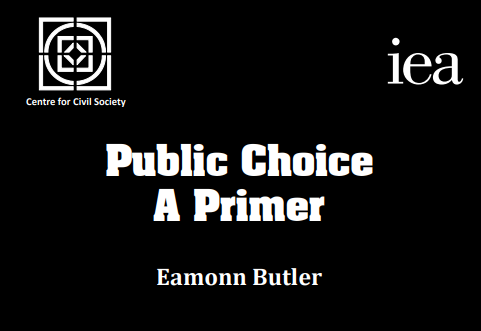 Many people assume that people work for the greater glory of the common good. And, therefore, politicians will work for the benefit of society. Businessmen will work for the benefit of society. Citizens will agitate for the general public interest. And so on. But that doesn’t happen. A few years ago, I came across a fascinating book, “Public Choice – A Primer”, written by Eamonn Butler. You can access a pdf copy, published by The Institute of Economic Affairs and the Centre for Civil Society, for free here. This is an excellent primer for students, teachers, sociologists and government officials. It explains how we can reduce government failure and market failure by understanding the behaviour of the various characters on stage.

Public Choice shows how human behaviour impacts the way people operate. Politicians want to be re-elected. Bureaucrats want a larger budget. Businessmen want to make more money. Consumers want the lowest price. Citizens want everything for free. If we design policies that do not take into account these vested self-interests, we will have failed policies.

What triggered me to write this article, was a long discussion yesterday on WhatsApp about why wealth advisors ‘generally’ do not have the interest of their clients in mind. They are only interested in pushing products where they get a higher commission. And my reaction was, “Why are you surprised? If you had studied public choice, you would have realised that your wealth advisor is ‘generally’ expected to look after his or her self interest and sell a product that makes financial sense to their business.” I use the word ‘generally’ so that I do not paint all wealth managers with the same brush; there are some who do give advice based on the interest of their client.

Similarly, we can look at the agitation against the 3 farm laws that were announced by the government last year. This was something that was worked on by the previous government also. Why did they protest now? This was something that most farmers across the country supported. Why did a very vocal minority protest? It is easily explained by the self-interest driver that public choice talks about. Politicians of other parties do not want to give the current party the credit for bringing in these changes. Farmers and middlemen in Punjab do not want to give up their easy income. Hence, by ignoring the importance of self-interest, a good policy struggles to become effective law. Part of the blame for the failure also lies with the government – if the government had followed parliamentary convention, the outcome may have been different. The ability to design public policies properly is, therefore, so important.

What complicates matters further is that there is no single “public interest”. Take for example the farmer bills. The late Sharad Joshi and his organisation, Shetkari Sanghatana, argued for the right of farmers to have freedom in the pricing of their products. A few years ago, I was given a booklet titled, “Anti-Farmer Laws” written in 2018 by Amar Habib of the Kisanputra Andolan and published by Parisar Prakashan in Ambajogai. Over 34 pages, he argues very articulately for the scrapping of 3 laws that were specifically set up to help farmers – Agricultural Land Ceiling Act, Essential Commodities Act and Land Acquisition Act. The farmer suicides in his state drove him to write this book. He argues that the policies of the government in response to these suicides were destined for failure because they did not address the root cause of the suffering of these farmers. You can access a pdf copy for free here (there are 3 versions in Marathi, Hindi and English).

Public Choice also explains why vote banks play a critical part in the political process and why focused interest groups can be very successful.