All states place restrictions on who can buy farmland. India’s low score on the protection of property rights harms farmers. 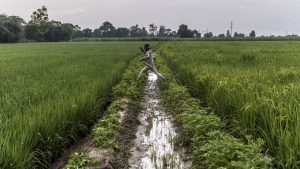 On 21 March, the Swatantra Bharat Party released the Supreme Court Committee Report on the Narendra Modi government’s farm laws. While the report mainly looked at the three farm laws, it also studied the small landholding rates among Indian agriculturists. What are the reasons for this?

The Human Freedom Index 2021 ranks India 119 out of 165 countries on the level of freedom. India’s legal system and property rights scored an abysmal 5.5 out of a possible 10. These numbers seem unrelated to the daily lives ordinary Indians. But the state of Indian agriculture shows how these rankings reflect the impediments to human flourishing. The average landholding size for farmers has been steadily declining. The average agricultural household holding was 2.28 hectares in the 1970s; the latest Situational Assessment Survey reveals this fell to 0.83 hectares in 2019.

Onerous regulations that hurt choice, freedom, and well-being burden the agriculture sector in India. These restrictions are even more pronounced in the market for agricultural land. Laws across Indian states restrict the sale and lease of land. These restrictions have had a significant impact on land sizes, productivity, and farmer incomes.

Restrictions on who can buy

All states across India place restrictions on who can buy farmland. For instance, Non-Resident Indians (NRIs) and foreigners are prohibited from purchasing any farmland. Chhattisgarh, Himachal Pradesh, Jharkhand, Maharashtra, and Odisha have further restrictions. For instance, Maharashtra only allows “agriculturists” to purchase agricultural land. In Himachal Pradesh, only an “agriculturist from the state” can buy land. These laws restrict the pool of buyers for agricultural land and inevitably causes the value of land to be artificially low.

Restrictions on how much you can buy

Most Indian states place a ceiling on how much farmland a person can own. These restrictions vary from state to state and depend on land quality. In Andhra Pradesh, Gujarat, Himachal Pradesh, Karnataka, Kerala, Odisha, and Telangana, the maximum a family of five can hold of the most fertile land is 4.05 hectares. The ceilings rise as the quality of land drops. In Andhra Pradesh, Gujarat, Karnataka, and Telangana, the ceiling for the lowest quality land is 21.85 hectares

These restrictions prevent farm sizes from growing and mechanised farming practices remain unviable. The ceilings are much higher than the average farm size. But economies of scale only kick in after crossing a certain threshold. The productive efficiency of growing from 2 hectares to 4 hectares is insufficient to justify additional investment. In fact, increasing to 4 hectares will probably cause diseconomies of scale since it is still not large enough to adopt efficient mechanisation but is too large to manage using only family labour.

Laws in India also restrict leasing rights for agricultural land. These laws force farmers to lease their land in the black market since formal leasing is either banned or poses significant risks.

Bihar, Himachal Pradesh, Jharkhand, Karnataka, Kerala, Madhya Pradesh, Odisha, Telangana, Uttar Pradesh, and Uttarakhand ban leasing. Kerala is the only state with an outright ban on leasing. Most other states have some exceptions. For instance, Karnataka allows soldiers and seamen to lease their land while Madhya Pradesh allows leasing for disabled persons, widows, imprisoned persons, among others.

In Gujarat, the leasing laws vary depending on the region. While the Saurashtra region bans leasing with some exceptions, the erstwhile Bombay and Kutch areas allow anyone to lease.

Most states, except Jharkhand, Madhya Pradesh, Uttar Pradesh, and Uttarakhand, place a ceiling on the rent landlords can charge. These ceilings are often based on production. For example, Andhra Pradesh limits rent to 30 per cent of the value of produce, while Karnataka limits it to one-fourth of the produce value. As a result, the landlord has no idea what they will receive when they lease out their land. This makes the viability of leasing dependent on factors entirely outside their control.

These factors have led to a severely depressed land leasing market in the formal sector. The Sample Survey Office, based on household surveys, show that 13 per cent of land is leased in India. But the Agri Census data, based on land records – a reflection of formal leasing – show only 0.36 per cent leased land. This vast discrepancy is evidence that the lease market is not functioning as it should.

India’s low score on the protection of property rights reflects how the law burdens individuals and hurts them from reaching their potential. Stable, secure property rights and the freedom to choose how to trade your property are vital features of any market economy. It is a necessary right for encouraging entrepreneurship and investment.

NITI Aayog has already created a model land leasing act that fixes the major problems in agricultural land leasing. The draft bill allows for leasing based on a contract and does not deprive landlords of their land at the end of the lease. It will enable farmers to lease agricultural land in much the same way individuals rent a house. This will drastically improve the functioning of the market and encourage investment.

The history of development across the world has been of moving from a largely agrarian workforce towards manufacturing and then service industries. A legal regime that respects property rights and allows for this shift is the only way this will happen. The enormous unrealised potential of the agricultural economy can only be realised by unshackling the main asset of a farmer – their land.