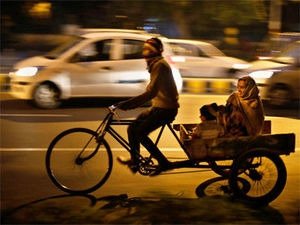 GiveIndia, the giving platform that has raised about Rs 185 crore over the years for NGOs, showcases 10 distinct causes for online donors flocking to its website: children, education, women, youth… Each cause is populated with numerous donation options. One of the 10 causes listed, however, stands out as a grand aberration.

It provides no options whatsoever— not a single NGO is listed against this cause for any donor keen on this particular space. ‘Human Rights’ stands forlorn, and neglected. Dhaval Udani, CEO of GiveIndia, concedes there are gaping giving gaps, and that human rights will certainly gain in prominence as philanthropy matures in India.

He also attributes this anomaly to a degree of policy fuzziness. “Human rights don’t figure as a charitable activity under the income tax laws,” he says. Human rights is largely seen as a no-go area for various reasons. It’s primarily because of an inability to comprehend what it really means and how it pans out on the ground.

It’s partly also for an unsaid reason: the fear of retribution from the establishment. The government’s recent tightening of the Foreign Contribution (Regulation) Act rules on foreign funding of NGOs, and its crackdown on a swathe of advocacy and human rights organisations, stoke that fear. The system disincentives humanrights funding.

When Luis Miranda moved from private equity to philanthropy, many hailed him as long as he went along the traditional routes. When he started exploring human rights issues, red flags started popping up. His former corporate colleagues, well-meaning and protective, wondered why he was taking risks. This reaction is largely prompted by a lack of awareness and the opaque nature of the sector itself.

And, therefore, a concerted drive has begun to mainstream human rights into the developmental agenda. The range of human rights issue areas can be diverse and fascinating (See graphic). It need not be limited to civil or political rights alone, as highlighted by a recent global survey, though Udani recognises the fact that the tremendous response to the Lokpal and AAP (Aam Aadmi Party) movements can indeed resurrect and invigorate the human rights space like never before. The signs are already there.

The gaining traction of the LGBT (lesbian, gay, bisexual and transgender) movement, and the coming out of thousands of gays protesting the recent court pronouncements, is indicative of the changing social mores. It is also indicative of the heightened accent on individual liberty and freedom from discrimination.

While it is usually identified with the civil and political space, human rights is also pivotal in the context of economic, social and cultural rights. “Rescuing women from domestic violence, or trafficking, is a real issue,” says Miranda, who has been supporting Sneha, a Mumbaibased NGO that focuses on women empowerment. It is now dawning on the international community that the power of philanthropy has to integrate with human rights issues.

The ties need to be clarified, strengthened and debated. That is the reason why the US– based International Human Rights Funders Group (IHRFG) and the Foundation Center embarked on a three-year global survey, the first ever, to get a fix on human rights issues and philanthropic monies. The report, ‘Advancing Human Rights: the State of Global Foundation Grant Making’, released a few months ago, found resonance as 2013 came to a close, also the time for giving in western economies.

Where The Money Goes

The study covered 703 foundations in 29 countries across eight geographic regions. Together, these made over 12,000 grants totalling $1.2 billion for the survey year 2010. Interestingly, even as the study was on, the ‘Arab Spring’ swept across the Middle East and the North Africa region, which, according to the study, was the second least funded region, at $24 million, in support of rights work till then.

Philanthropy’s response to the Arab Spring, and how it will or has altered philanthropy investments in the region, is being examined by the IHRFG. The recent involvement of new funders with deep pockets, like the Google Foundation, in human rights is also changing the global human rights giving landscape. The survey revealed that the US– based Ford Foundation topped the league with human rights grant dollars of $159 million.

The Open Society Foundations of billionaire investor George Soros, which seek to “build vibrant and tolerant democracies whose governments are accountable to their citizens”, made the highest number of grants at 1,248, totalling $140 million.

The study covered 26 issue areas, combined into 10 overarching areas of activity. Funding for individual integrity, liberty, and security accounted for a significant 36% of the funding ($429 million), with environmental & resource rights receiving just about 3% or $38.7 million.

While individual liberty attracted the maximum funding across the regions, there were some regional variations; in North America, health and well-being rights followed closely. It was sexual and reproductive rights in Latin America and Sub-Saharan Africa; migration rights in Europe; and environment and revenue rights in the Asia-Pacific region.

The issues that captured at least 5% of grant dollars include health & well-being rights ($119 million), sexual and reproductive rights ($103 million), social and cultural rights ($68 million) and access to justice/equality before the law ($62 million).

The study also focuses on the changing global geopolitical context, the gradual power shift, and indicates that the arenas for human rights philanthropy are moving towards the emerging economies. Importantly, the identity of human rights violators is also changing. Human rights work, traditionally, dealt with the state as violators of the rights of its citizenry. Now, ‘non-state actors’— including large corporations and international financial institutions—as sources of significant rights violation are of increasing concern.

This trend is seen by the IHFRG as “one of the biggest challenges the world faces” today. On the flip side, it is also believed that the growing influence of non-state actors “offer a growing source of potential allies in human rights promotion and protection”.

Corporations, in the near future, will be involved in human rights issues, either in a positive, facilitating embrace or in a negative, debilitating manner.